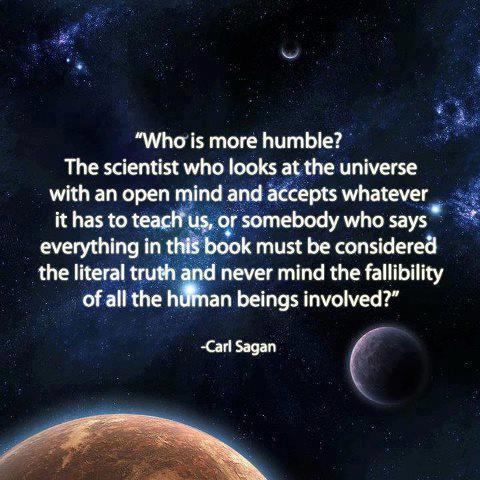 Yes, the scientist who looks at the universe with an open mind and learns what Nature has to teach is more humble (or teachable) because he acknowledges that the mysteries of the universe are always unfolding and are reminding us that there is still so much more that we don’t know, hence so much more to know and discover, given the endless expanse of the universe that is still expanding as well as the continual state of evolution of our human consciousness to appreciate our oneness with the universe, and at the same time, embrace the mystery of the unknown and yet-to-be-known. It reminds me of another quote I came across recently.

Yes, and the problem of treating everything in that one book as “the literal truth” is that it ignores the fallibility of all the human beings involved, as noted by Carl Sagan. Besides, literalising the Bible only results in creating a false sense of certainty among the followers, as well as causing them to live in unspoken fear and superstition, which I mentioned in one of my blogs entitled “Do myths have their place in modern society?“.

“We absolutely must leave room for doubt or there is no progress and no learning. There is no learning without having to pose a question. And a question requires doubt. People search for certainty. But there is no certainty. People are terrified — how can you live and not know? It is not odd at all. You only think you know, as a matter of fact. And most of your actions are based on incomplete knowledge and you really don’t know what it is all about, or what the purpose of the world is, or know a great deal of other things. It is possible to live and not know.”